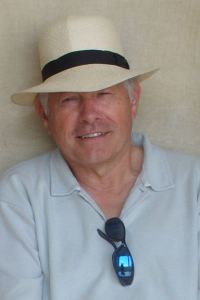 I was born in Southsea, Hampshire in 1946, but spent most of my childhood and early working life in Kent. At school I struggled in an age where dyslexia was not recognised, a situation that required me to find my own ways of overcoming the problems that arose from this frustratingly limiting condition. Like many sufferers at that time intelligence tests that utilised shape sequencing came to me easily, therefore the high grades achieved when compared to my conventional academic results had me marked down as lazy.  Fortunately my maths suited an engineering career in the construction industry that eventually took my young wife and I abroad to Zambia and Jordan. This period was both interesting and highly challenging, as my duties were more administrative and contractual than pure engineering. Now I found myself needing to read a great deal of legal language and write many carefully worded letters, eventually learning to truly defeat the one problem that had dogged my school years. Near the end of the 1970’s we returned to England and I changed firms to work with a Japanese trading house in London, administering some of their civil and industrial engineering projects. The long hours and frequent lengthy business trips began, after ten years, to take their toll and signaled the need for a change of career. The decision for us to take on a Sub-post office, was for me the worst career decision of my entire life, except that it eventually gave me the opportunity to read for a Master’s degree in Maritime Studies. That experience re-awakened in me, first, an interest in research, then, more importantly, an interest in writing, though this had actually started some years earlier when I was on one of the many business trips waiting for a flight at London Heathrow’s Terminal Two. Then I had been sat reading the file relative to the meeting I was to attend when I noticed that the flow of passing travellers was disturbed, and looking up saw a woman and man striding purposefully against the general flow. So fierce, hateful and cruel were their expressions that people were hurriedly getting out of their way, and I became a thriller writer, using their facial image as those of the two main villains of my debut novel. Had someone said the day before this incident that such a thing would be the start of a writing career I would probably have been the first to fall about laughing. During the following few months the first draft of the early chapters of ‘A Cast of Hawks’ were written, then as my work load ratcheted up yet again the manuscript was put to one side and almost forgotten for twenty years. It would be a throw away remark and a chance finding of my earlier work that really set me on the road to becoming an author; and now with the sequel ‘Batsu’ and ‘Shadows in Sunshine’ published I cannot think of myself as doing anything else.

I combine my writing career with author talks, speaking at libraries, organisations, like the Town’s Women’s Guild, The Women’s Institute and reader groups. As recreation my passion is the sea and sailing, whenever yacht owning friends put a call out for crew.

6 thoughts on “My long journey to becoming a writer”